Our survey investigated to what the extent South Dakotans trust the government and each other. Both forms of trust are a necessary foundation of democratic society and we suspect that they may shape attitudes towards COVID-19 mitigation strategies, such as vaccination. We first asked participants of our survey how often they can trust the government to do what is right. Unsurprisingly, fewer than 1% answered “always,” with 14% answering “most of the time.” About 24% South Dakotans believe government can be trusted “about half the time,” 48% “some of the time,” and 14% answered “never.” We observe significant differences between South Dakota Republicans and Democrats, congruent with the ideology and messaging of the modern parties. Republicans are to no surprise more distrustful of the government than Democrats. About 69% of Republicans reported trusting government to do what is right “never” or “some of the time,” compared to 38% of Democrats. 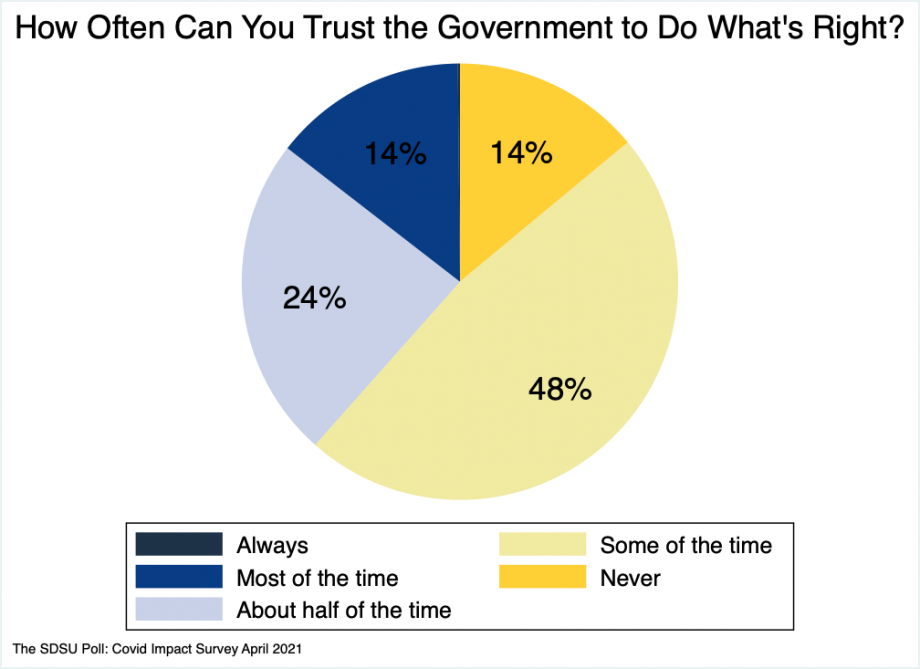 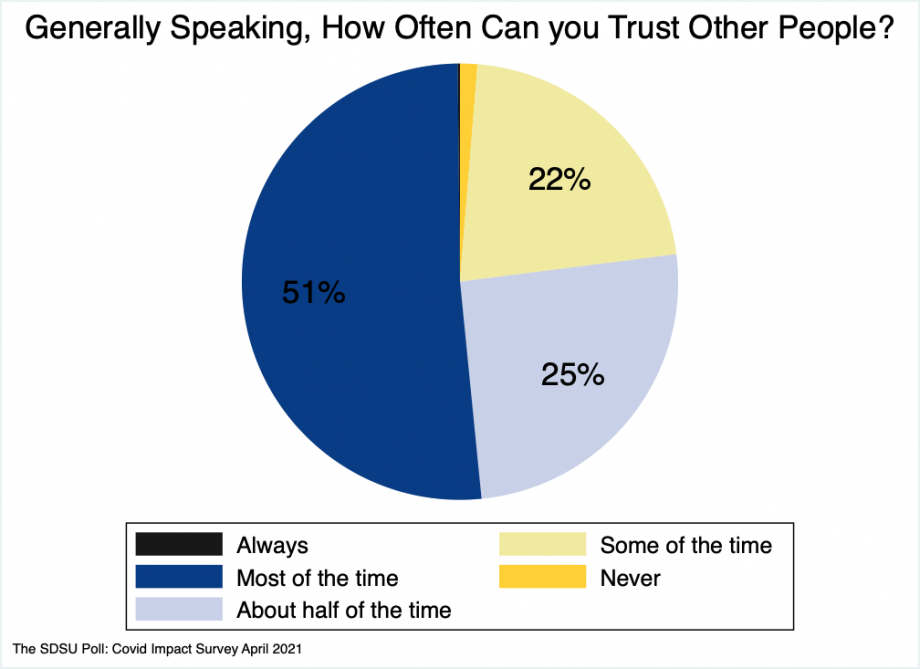 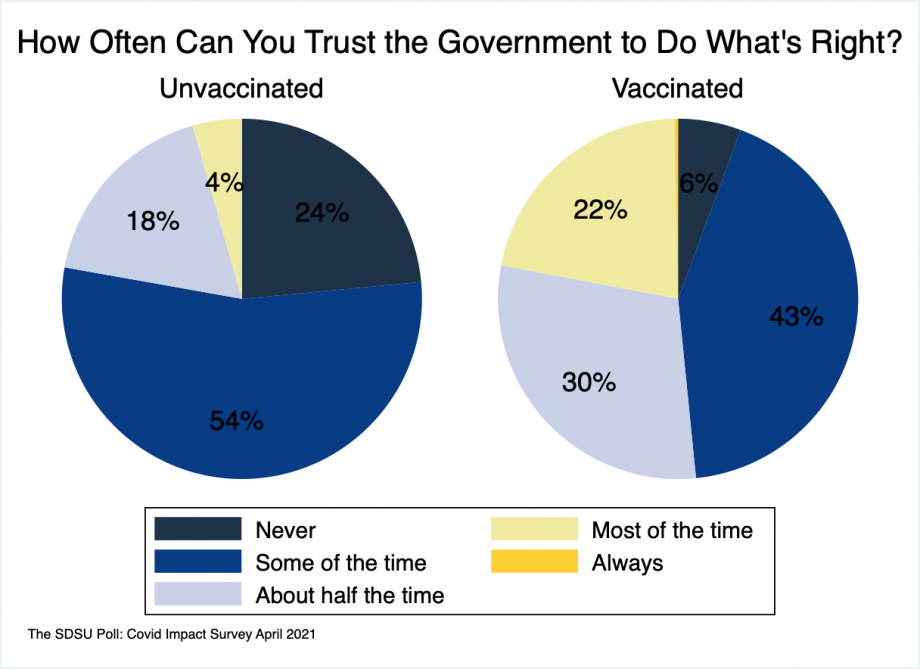 We are also interested in the trust that South Dakotans have in health officials and other medical professionals. We asked respondents to give “thermometer ratings” of their own doctor, their pharmacist, the South Dakota State Medical Association, and Dr. Anthony Fauci. The results show that South Dakotans have warm feelings for their own doctors and pharmacists, with a mean rating of 80.3 and 77.3, respectively. The South Dakota Medical Association had a score of 64.6 indicating mostly warm feelings and Dr. Fauci scored 50.5. Importantly, Fauci’s ratings were very polarized, and the two most frequent scores given to him in our sample of over 3,000 voters were 0 and 100. He is clearly a polarizing figure and been caught up in politicization of the pandemic. 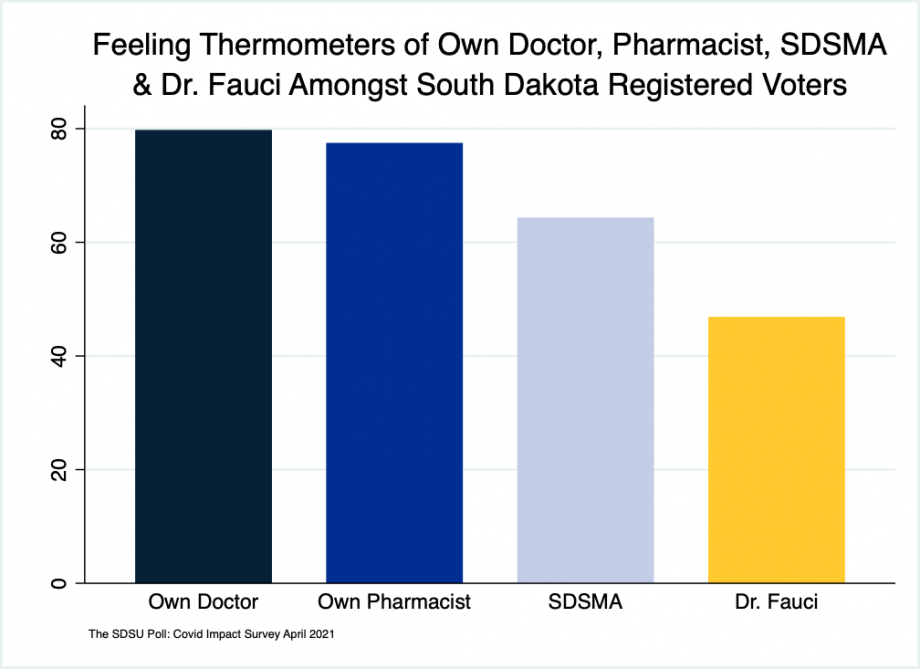 Doctors and pharmacists have strong ratings even among those South Dakotans who believe that government can never be trusted, with scores of 64.5 and 62.7, respectively. The South Dakota Medical Association and particularly Dr. Fauci received lower scores, at 42.3 and 12.6, respectively. Given the fact that SDSMA is the professional association of physicians in the state, and that Dr. Fauci directs a federal agency, these findings are to be expected. 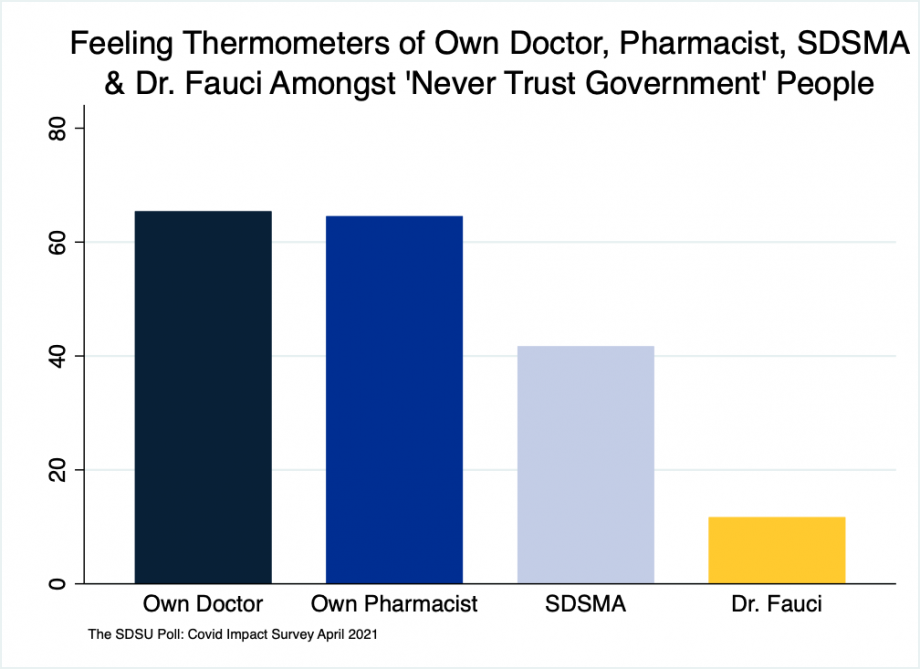 Based on these findings, it appears that alongside clergy, local doctors and pharmacists might be most successful at encouraging the unvaccinated South Dakotans to receive the shot, and perhaps to deliver most public health messages. The people who are not vaccinated are the same people who distrust the government and to a certain degree, the medical profession writ large. However, our findings show that these people have still warm feelings towards their doctors and pharmacists. For this reason, messages from federal and state officials encouraging vaccination will likely be viewed with skepticism, given the levels of distrust the unvaccinated population has for the government. On the other hand, an encouragement from a doctor or pharmacist that they know and trust might help change vaccination attitudes amongst these South Dakotans.