The South Dakota COVID-19 Impact Survey was conducted from April 12th to 25th, 2021 by The SDSU Poll, a research group housed in the School of American and Global Studies at South Dakota State University. A total of 3,057 registered voters in South Dakota completed our survey about the impact of the COVID-19 pandemic on their daily lives, alongside questions on political beliefs given the partisan polarization of the policy response to the pandemic. The margin of error of this survey was +/- 2 %, which is less than most state-wide polls. So that our sample is representative of the entire population, we have “weighted” our data to ensure that there are adequate numbers of respondents from rural areas of each quadrant of the state, and the metro areas of Sioux Falls and Rapid City.

The primary dimension of regional identity in South Dakota is on a West-East dimension. For you non- South Dakotan readers, the state is neatly bisected by the Missouri River. Differences in climate and ecosystem largely underpin different agri-businesses and a host of cultural factors that accompany that. While these differences might seem insignificant, or at most, rather subtle to outsiders, this is a very real cultural marker in the state from the perspective of its residents. In many ways, the east-river/west-river dimension is quite real. The survey we conducted in October uncovered east-river/west-river differences on a range of social and political issues.

In many respects, attitudes on COVID-19 and even the impact that COVID-19 has had on the population, struck the state differently on this geographical divide. While the disease is obviously oblivious to any border, river, or any conventional division in the population, our reactions to the disease may reflect any political geographic distinctions. In terms of the overall spread of the disease, the two sides of the state were nearly identical. Virtually everyone knew someone that had contracted COVID-19. The two sides of the state are statistically indistinguishable from one another. 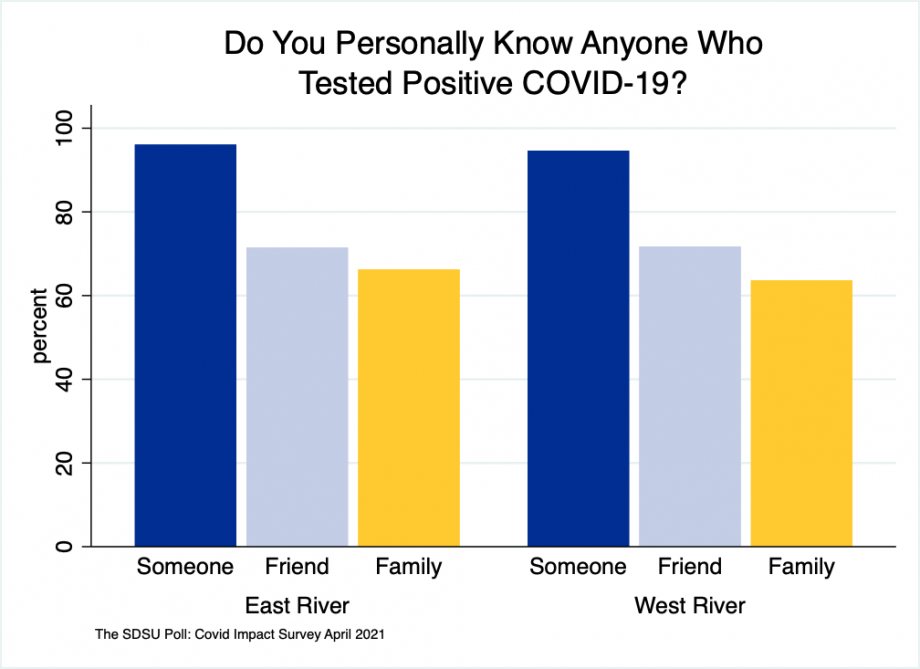 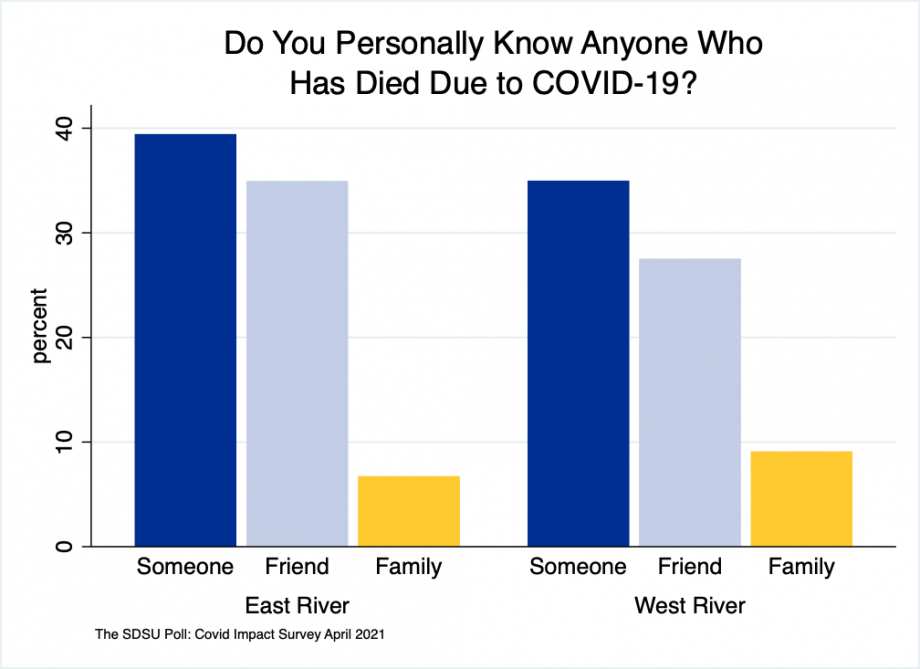 There are also clear differences in how concerned people are about COVID-19 in general. West River respondents are simply less concerned about the disease than those in the east, despite being more likely to have a family member falling to COVID-19. We believe this is largely an extension of partisan identification. West River, the partisan breakdown is 49% Republican, 26% Democratic, and 25% independent; whereas East River it is 45% Republican, 30% Democratic, and 25% independent. While both sides of the state are decisively Republican, the gap is greater out west. From the earliest days of the COVID-19 pandemic, there has been a consistent message from Republican quarters of downplaying the dangers of the disease. Indeed, the majority of people who contracted the virus were relatively unscathed by the illness. For those who did contract the virus, comparisons to the flu and the use of the word “hoax” abounded, feeding the belief that this was not something to be terribly concerned about. The messaging from Democratic quarters that the pandemic was the gravest public health threat in a century and required a comprehensive governmental response not only pushed Democratic respondents towards the other pole, but also hardened the assumptions of those on the right. Put differently, the magnitude of threat posed by COVID-19 became just another partisan issue. 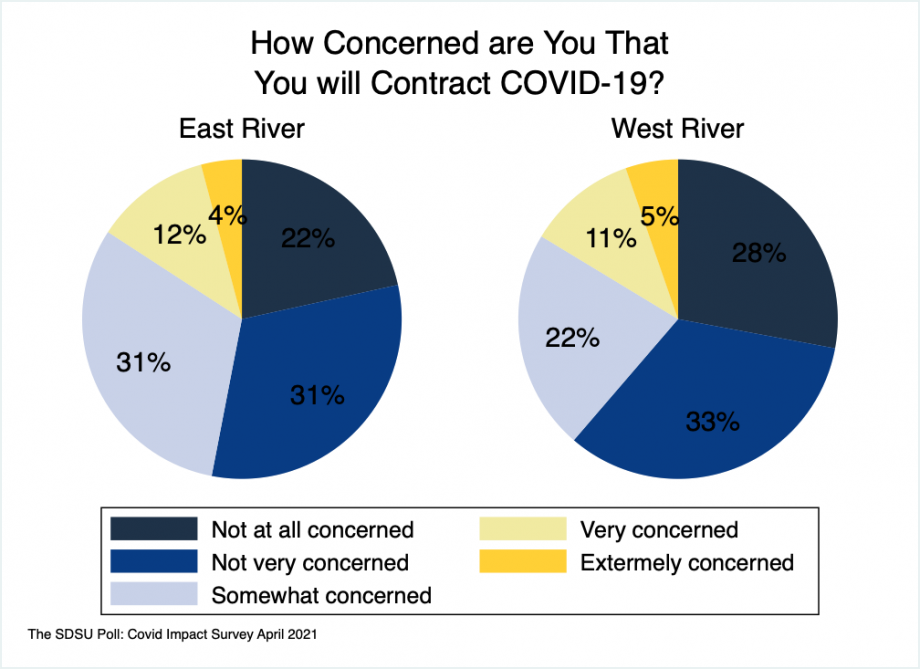 As we have seen in both the present poll and our October poll, concern about COVID-19 is directly tied to the mitigation measures people are willing to take as well as the willingness to get vaccinated. East River residents have sharply higher vaccination rates than those in the west. Responses to our poll began on April, 12, the day that South Dakota’s vaccination rate hit 50% of the adult population, and as the graph below shows 54.1% of East River respondents reported receiving at least the first dose of the vaccination, while 45.6% of West River respondents had begun their vaccination sequence. 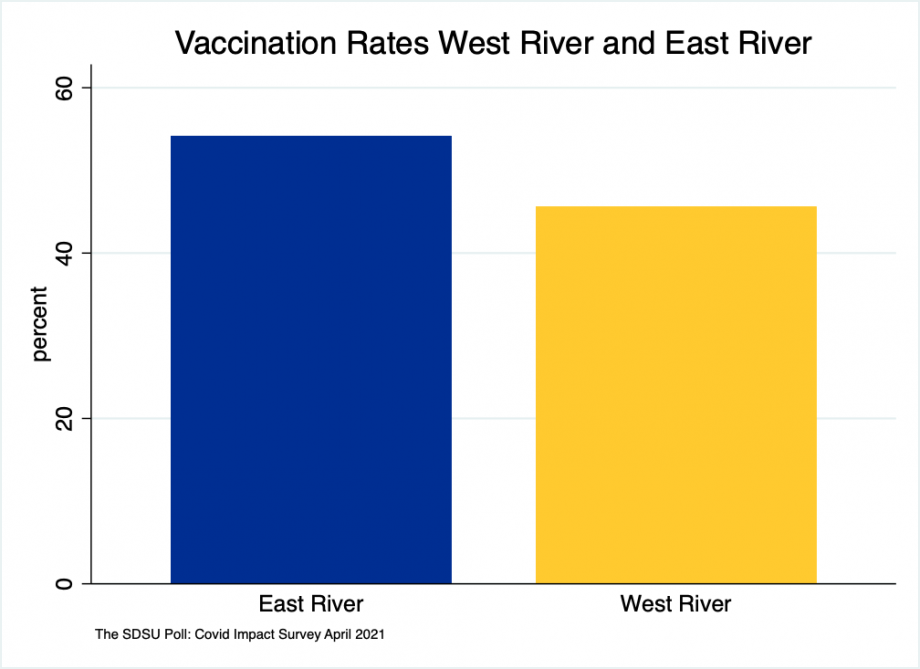 Unsurprisingly, the self-reported likelihood of non-vaccinated residents in getting one of the authorized vaccines is lower West River than it is in the east. More than 72% of unvaccinated West River respondents say they unlikely to get the vaccine compared to 67% East River. Moreover, only 16% of western respondents showed any likely of “getting the jab” compared to 20% of those in the eastern half of the state. Given that public health officials have a stated goal of a 70 to 80% vaccination rate, these numbers suggest that this goal will be a challenge to meet. This is why our work on messengers may prove useful to public health authorities as they set about convincing this very resistant remainder of our population. 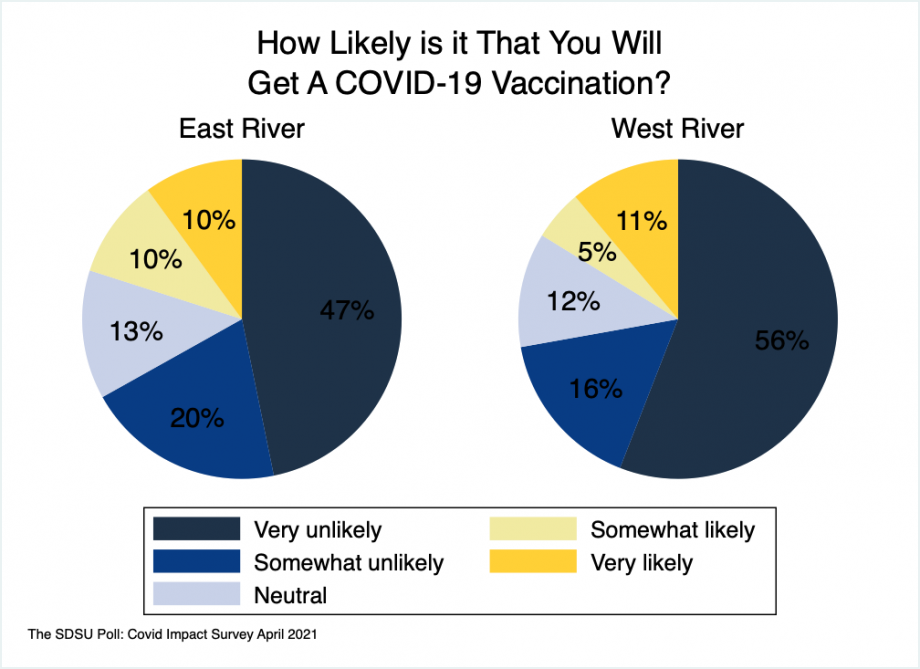 Because COVID has taken on such partisan terms, in our next release we will dig deeper into the partisan self-identification in the state.