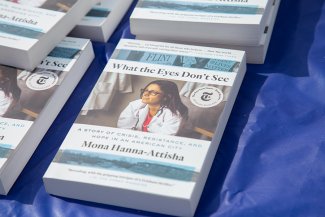 Called “Stirring . . . [a] blueprint for all those who believe . . . that ‘the world . . . should be full of people raising their voices’” by The New York Times, “What the Eyes Don’t See” has been chosen as the 2021 Common Read selection at South Dakota State University.

Written by Mona Hanna-Attisha, M.D., MPH, FAAP, the book reveals how she discovered the children of Flint, Michigan, were being exposed to lead in tap water and how she exposed that fact.

Hanna-Attisha is a physician, scientist and activist who has been called to testify twice before the United States Congress, awarded the Freedom of Expression Courage Award by PEN America and named one of Time magazine’s 100 Most Influential People in the World.

The SDSU Common Read is designed to bring together people from all areas of campus and the Brookings community to learn, discuss and engage a singular, impactful book and associated themes.

The Common Read started in 2009. It was originally designed to raise the level of academic challenge at SDSU, enhance our awareness of diverse perspectives, increase faculty and student interaction, encourage serve and promote enriching, engaging educational experiences both in and outside class.

A group of students, faculty, staff and community members plan and implement the Common Read experience each year. The group selects the book, provides training for faculty and staff who will be teaching the book and plans numerous events designed to encourage participation and employ critical thinking around the text.