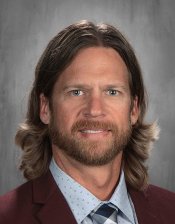 A change in attitude has paid off for Mathew Raba ‘01/M.Ed. ’08. He believes that change in attitude early in his administrative career was one of the key factors why he was selected as the South Dakota Association of Secondary School Principals Principal of the Year for the 2020-21 school year.

Raba, who is in his 12th year as the principal at Belle Fourche High School, was in his second year when he received a letter commenting on his performance. After getting defensive while reading it, Raba asked Clay Anderson to read it. Anderson was the school’s activities director and Raba looked at him as a mentor.

“He just looked at me and said, ‘Well, if this is the perception of your staff, perceptions are real.’ it just hit me like a ton of bricks,” Raba said. “And seriously, it was a turning point in my career. If that's the way they saw it, then I needed to change my behaviors. It was more kind of just like an attitude toward my job thing than anything. It really shaped me and helped me grow. I'm forever indebted to the person that wrote me that letter and also to Clay and his guidance and support through that process.”

Raba said he became a better listener and communicator and relaxed his strict mindset on what a principal should be.

The changes allowed him to be named the Region 7 Principal of the Year in 2013-14 and again in 2019-20, putting him in consideration for the state honor,

However, the state award announcement still came as a shock.

“There are a lot of big-time principals who could have been in the running, a lot of hard-working men and women in the state who do what I do,” he said.

He thought something was up when Belle Fourche superintendent Steve Willard texted him on a Saturday morning about his evaluation the following Tuesday.

“At first, I was really nervous, ‘like, what did I do wrong? What is this all about? Why is he texting me on a Saturday morning?’ And then it was actually later on that evening that I sort of had an epiphany of, ‘Oh, I wonder if he found out some good news. And he's going to surprise me with it.’” Raba said.

“The award means the world to me. I know there are men and women across the state who are doing the same thing that I do every day, and in the grind of being a principal, at the high school, or really at any level, is very challenging,” he continued. “Each day, you don't really know what's going to come across your plate or what you're going to have to deal with. This is my 12th year as a high school principal so I definitely have put in my time, faced my challenges and many different things and feel like I'm pretty good at facing a lot of those challenges now. But it took a lot of years of practice and making mistakes to get there.”

Raba, a native of New Underwood, started at Belle Fourche in 2002 teaching mathematics. His switch to administration came after Willard was named superintendent and Raba had recently finished his master’s degree.

Willard encouraged Raba to apply for the position and has enjoyed working with him.

“Mr. Raba is a great principal and person. He cares about his students and his staff. He is always willing to lend a hand or thoughtful opinion when needed. He also has a wry sense of humor that makes administrator meetings fun,” said Willard.

Raba appreciates the push from Willard in 2009.

“Dr. Willard hired me as a teacher and again as a principal, so I owe a lot to him for where I am in my career.  He’s been a mentor that’s always believed in me and given me guidance,” Raba said. “I also owe a lot to our administrative team, especially my fellow principals.  We share a lot of ideas and are always learning from one another.”

While Raba misses the in-class exchanges with students, he attends as many activities as possible and spends each day in the lunchroom.

“I found that there's a lot of opportunities still to develop those relationships with the students. I hop around the lunch tables and tell corny dad jokes and just do whatever I can to kind of connect with them,” said Raba, who also is an assistant football coach.

But the position is not just developing relationships with students, parents and staff as he also gets to help develop teachers.

“Another thing that I've really enjoyed, as I've grown in this particular role, is helping young teachers grow, especially through their first few years in the profession,” he said. “It's really rewarding for me to see these people come in as being very raw, inexperienced teachers and work into being some really good instructional people and do some amazing things. I just like helping those people grow into their profession and find their niche in the field.

“I don't really think of what we've accomplished here at Belle Fourche High School over 12 years was just a result of me; I think of it as the whole team that I have here,” Raba continued. “We’ve all really put a lot into making the most for kids, making the most opportunities possible for them to be ready when they move on to the next stage of their lives. For me to sort of feel like I'm taking credit, that solely is a little bit silly, because there's just no way it could have been done without all those other people and all of the players who make things happen.”

And all because he accepted someone’s comments to make a change in attitude.