The South Dakota Voter Survey was conducted in the first two weeks of October by The SDSU Poll, a research group housed in the School of American and Global Studies at South Dakota State University. Our survey of 485 registered voters in South Dakota asks respondents about their impressions of several aspects of Governor Kristi Noem’s performance. In addition to our thermometer measurements we introduced last week, we asked respondents to make assessments of the governor on specific qualities. The margin of error is +/- 4.5%, on par with other state-wide polls.

As we have shown before, Governor Noem has the strongest ratings of any politician we asked about amongst the Republicans in our sample. However, her ratings amongst independents and Democrats were weak relative to South Dakota’s congressional delegation. To better understand the contours of opinion on the governor, we have broken the electorate down into several sub-groups to get a more fine-grained understanding of where the governor’s support is strongest and weakest. It should come to no surprise, given our polarized electorate, that partisanship is the primary lens by which the electorate evaluates the governor. Republicans are strongly supportive of her with a mean score of 78.5, and Democrats highly critical of her with a score of 9.9. On balance, independents are rather “cool” towards the governor, with a mean score of 36.9. 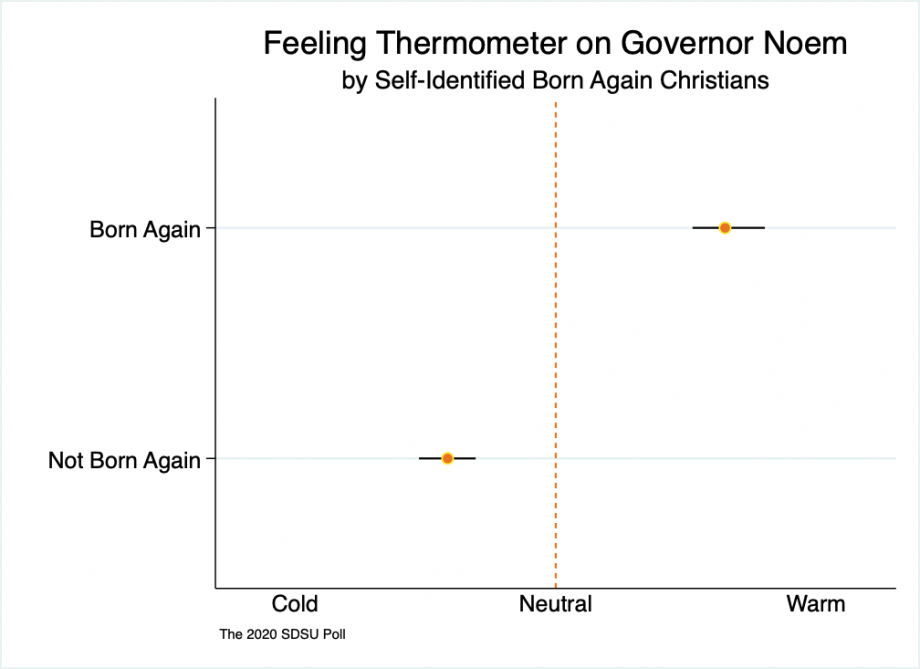 Other Key Constituencies and their Support of the Governor

Other demographic groups show strong tendencies in their evaluations of the governor, but are not as decisive. One such group is income. We divided the sample into 3 categories. The lowest category are those with household incomes of less than $30k per year (South Dakota’s poverty line is roughly $25k), those from $30k to just under $75k (the average household income is roughly $74k), and those of $75k or greater. Respondents from the lowest income category give the governor a mean score of 33.4, decidedly on the “cooler” side of the scale. Meanwhile, those in the middle and upper categories of income are relatively neutral overall, rating the governor at 50.7 and 45.9, respectively. 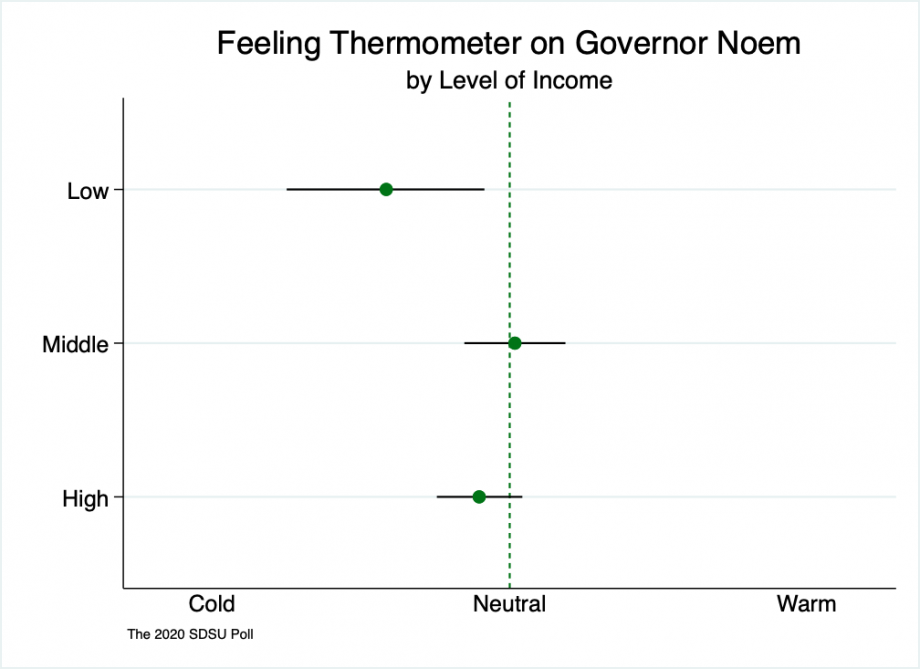 There is also a geographical dimension to the governor’s ratings. South Dakotans are accustomed to ascribing a “West River-East River” dimension to all sorts of things. This divide is rooted in a widely perceived cultural difference stemming largely from agricultural practices. Our results, on face, lend some support to that understanding, as there are clear differences between respondents living on either side of the state. West River respondents give a warmer evaluation of the governor at 54.1, while East River respondents offer a cooler 45.9. Drilling a bit deeper into this geographical dimension, we took advantage of a question about self-described place of residence: city, suburb, small town, or rural. It is here where geographical differences really begin to emerge. Those in rural areas give a much warmer assessment than any other group at 59.7, those from small towns are nearly neutral at 50.2, while those in the cities and suburbs give the governor a mean rating of 42.3. We suspect that a lot of the apparent West River - East River dimensionality on political issues is explained more by this urban-rural dimension given the settlement patterns in the state. We will return to this dimension in tomorrow’s press release. 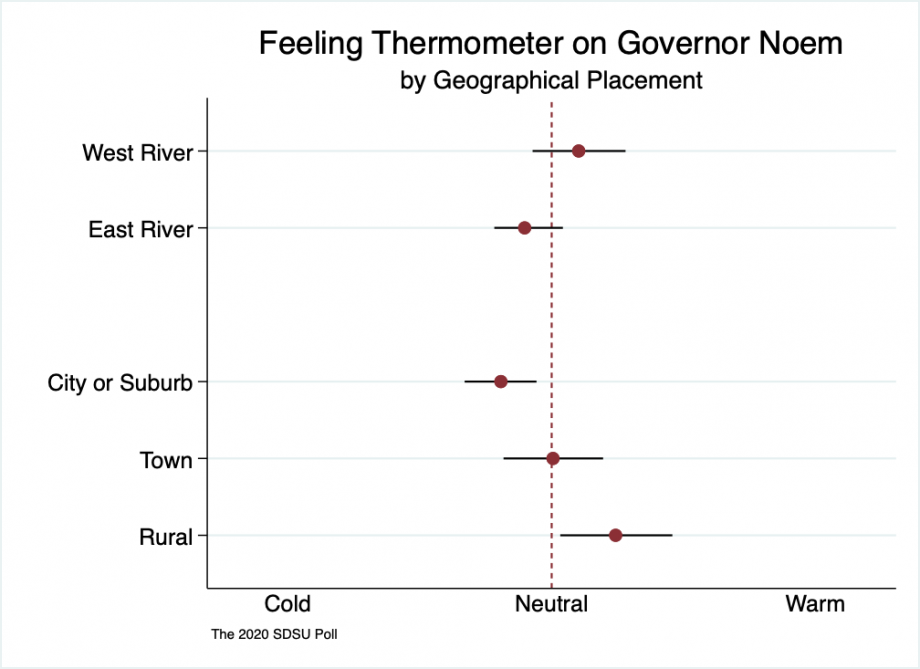 The Evaluation of Specific Personal and Political Traits of Governor Noem

As is standard in academic political polling, our survey asked respondents on their agreement or disagreement with several statements about Governor Noem. These included: “She cares about people like me,” “She is intelligent,” “She is hard-working,” “She places the needs of the state above her own,” “Her political priorities align with mine,” and “Her ambitions for higher office interfere with her job as governor.” These statements are assessments on both personal and political traits, which allows respondents to offer more nuance about her job performance far beyond what a simple approval indicator could offer. The results reflect the deep partisan polarization of the electorate, and indeed show some nuance between personal traits and political factors. Only a small minority of South Dakota voters question the governor’s work ethic or intellect, hardly surprising given her long political career and repeated success in state-wide elections. Where the governor is on the “wrong” side of the evaluations are on the more explicitly political assessments. About half of our respondents suspect the governor’s national profile is interfering with her job as governor, and just under half believe her political priorities do not align with theirs. In a strictly statistical sense, voters are evenly divided on the statements “She cares about people like me” and “She places the needs of the state above her own,” as those are within the poll’s margin of error. Taken together, the results show that Governor Noem remains popular, yet is dealing with mixed reviews; none of which is surprising given the current political climate and the unfolding COVID-19 public health crisis. 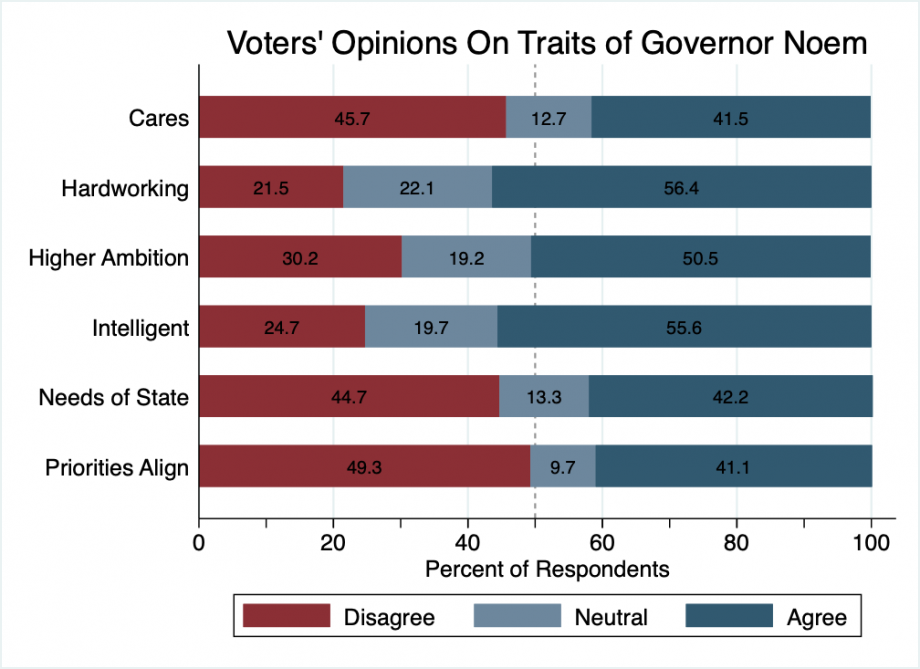