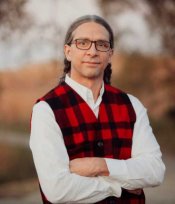 Freeland is an assistant professor and also serves as the American Indian studies program coordinator. He  delivered “An Indigenous Intervention: Method, Truth and the Power of Community,” which was available on Facebook Live via The Oscar Larson Performing Arts Center.

“I was very excited when I heard the news that I would be the Hendrickson/Cheever recipient. It is truly an honor to be selected and the role of liberal arts in academia is a very important topic,” Freeland said. “I really look forward to giving this lecture and adding to the tradition that the previous recipients provided.”

Freeland said his lecture topic is one he works with a lot in the classroom and while conducting research.

“Over the last century, quite a bit has been written about Indigenous peoples, but much of it has been done poorly and does not take into account Indigenous frameworks of thought,” he said. “As an academic, I work to correct these misconceptions by using my own language to draw from my own Anishinaabe intellectual tradition. By addressing problems from a different perspective, I can provide a shift in analysis that can provide new solutions that may not have come about yet. This is the power of a diversity of thought.

“Indigenous thought has a lot to offer higher education and society as a whole. I think this is one of the primary benefits of a liberal arts tradition, to ask hard questions about the integration of multiple perspectives,” he continued.

While Freeland did not plan to use the lecture as a classroom lecture, he hoped it spurs others to learn more about Indigenous people.

“I would like people to be thinking about the role of liberal arts education in asking hard questions and the contributions of Indigenous intellectual traditions in that process. I think for a lot of people, it will be the first time they think at a deeper level about Indigenous peoples in the present tense and that we may have something to offer higher education,” he said. “In this way, it will be good that they can think about these contributions and what it means to be in relationship to Indigenous knowledge. I would also like if a number of people can continue the conversation and use this lecture as a catalyst to engage more with Indigenous peoples.”

The award and lecture are named for two former College of Arts, Humanities and Social Sciences professors and administrators. Professor John Phillip Hendrickson was a longtime faculty member and head of the Department of Political Science from 1957 to 1988.

Herbert Cheever Jr. served as a professor in political science from 1968 until his retirement in 2000. He served as department head for nine years and as dean of the College of Arts, Humanities and Social Sciences for nine years.

Upon Hendrickson’s retirement in 1988, Cheever said, “J.P. Hendrickson exemplifies the qualities of the best of professors. His scholarship, teaching and advisement, character and citizenship have consistently, year in and year out, been ranked high by those who work with him or study under him. A professor’s professor.”

The J. P. Hendrickson Faculty Scholar award celebrates a life devoted to teaching and learning, strengthens the pride and cohesion within the College of Arts, Humanities and Social Sciences around its core mission and stimulates collective thinking about the importance and value of providing all students with the strongest possible liberal arts experience and education in and out of the classroom.

The Herbert Cheever Jr. Liberal Arts Lecture is the signature celebration of the value of a liberal education within the College of Arts, Humanities and Social Sciences at South Dakota State University. The Cheever Lecture emphasizes the role and importance of a liberal arts education in today’s increasingly specialized and vocationally oriented political and higher education climate.