Jane Mort has worn a lot of titles in her 34 years at South Dakota State University:

However, one of her most treasured titles is her last one, and one that won’t be found on a campus door—dean emeritus. She was presented the honor by former dean and current Provost and Vice President for Academic Affairs Dennis Hedge at a campus drive-through reception for fellow SDSU retirees June 16.

“It’s an honor that I will truly cherish,” said Mort, who retired June 21 after serving four years as dean.

Through a tenure of three and one-half decades, Mort’s list of honors could stretch pages. A few highlights are:

Most treasured award
What Mort most treasures, however, is not an award that can be put on a shelf but how she has helped advance the College of Pharmacy and Allied Health Professions.

That includes things like working with Jeanne Hoch to create the Hoch Endowed Professorship in Community Practice and supporting the work of that first Hoch Professor, Sharrel Pinto, secured a multimillion dollar award through the South Dakota Department of Health and the Centers for Disease Control and Prevention.

In addition, the new Department of Allied and Population Health was formed a year ago (July 1, 2019) and houses the medical laboratory science and Master of Public Health programs as well as social administrative faculty who teach content in the Pharm.D. program.

“This reorganization provides an opportunity to enhance teaching, research and service, and the bonds they have formed have been really rewarding to see,” Mort said.

Joining from Dakota State
A new addition to the department is a bachelor’s and associate program in respiratory care.  The Board of Regents just approved the programs transfer in May from Dakota State.  The program lacked the support of other health programs at the tech-based school and will have additional support at SDSU from health care student recruitment to interprofessional education activities, Mort said.

The program brings with it five faculty members (three full time) who have offices located at Monument Health in Rapid City and Avera and Sanford in Sioux Falls.

“Dr. Mort’s leadership of the College of Pharmacy and Allied Health Professions has continued advancing the college on an impressive trajectory,” Hedge said.  “The addition of the department of allied and population health was a bold and strategic move that will benefit the college and university now and for many years to come.”

Mort became interim dean in May 2016, when Hedge was named acting provost. She served in that role until April 11, 2018, when, in the words of Hedge, “As we conducted the search process, it was clear that we already had an excellent candidate for the position who was serving as our interim dean.”

Reflections on time as dean
As Mort looks back on her four years of directing a college with three departments, 45 faculty members, 11 support personnel, more than 400 students and a $10 million budget, she said, “I think we have continued to move forward in a lot of ways.”

She cited the creation of the Hoch Endowed Professorship in Community Practice, hiring the Haarberg Chair in Cancer Research, renovation of additional research lab space for that chair, renovation of student labs, creation of the Department of Allied and Population Health and growth of the Master of Public Health program as a few of her most exciting leadership achievements.

New programs planned
A new program being developed within medical laboratory science is an online certificate in phlebotomy. The 12-credit certificate offers a student the opportunity to gain a skill set to earn money as a phlebotomist while working through college and provides much needed health professionals, Mort said.

Other programs in the works are an accelerated program in medical laboratory science and a master’s in pharmaceutical sciences.

Pharm.D. remains strong
The Pharm.D. program continues to be very strong with a best-in-the-nation pass rate of 97.4% on the NAPLEX.

Executive team effectiveness grows
Mort is very proud of the way the college’s executive committee has become an extremely effective team during the pandemic. The nine-member group  includes herself, three department heads, three associate deans, an assistant to the dean and an assistant department head for pharmacy practice.

“When I started as dean, people would ask me to solve problems. However, as we were confronted with a wide array of challenges, including the pandemic, we learned to quickly form teams to solve problems … and their effectiveness is a testament to the quality of this great team. Serving as dean I learned a lot about empowering others to solve problems and achieve excellence,” Mort said.

The lessons learned and the opportunity to serve as the 14th dean in the college’s 132-year history aren’t lost on Mort.

“There’s been a small number that have had the privilege to serve as dean and I am thankful to be among them.”

Only female dean for college
Regardless of whether the 15th dean is male or female, Mort encourages her successor to trust the dean’s colleagues. “You’re working with a really strong group of people. There will be challenges, but it’s the right group of people to overcome those challenges.”

Mort’s future challenges include setting up home in Lincoln, Nebraska, where she moved to in August. It presented a chance to spend more time with family and explore new interests, she said.

Reflecting on Mort’s time at SDSU, Hedge said, “Jane has not only been an impactful leader for the college, she’s also been a tremendous educator, colleague and friend. Although she is departing SDSU, the impact of her many contributions to the college and the university will be everlasting.” 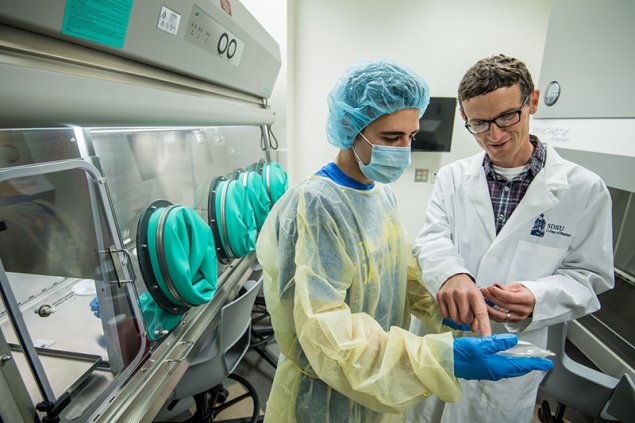