Selene Renes is a senior civil engineering student at SDSU. She is the 10 a.m. virtual commencement speaker. In late August, Renes is moving to Kansas City, Kansas, with her husband, Logan. She will become an assistant structural engineer at Burns and McDonnell for its energy and structural division. 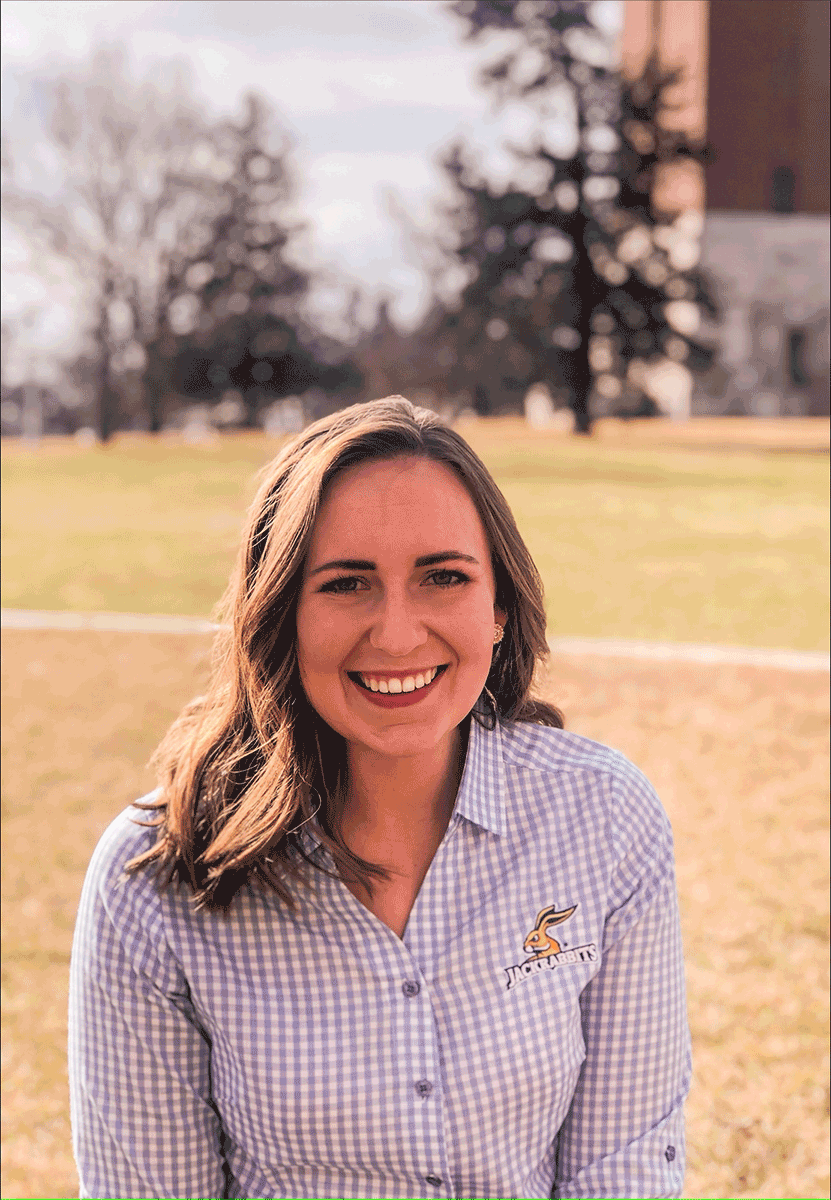 Selene Renes is a big fan of South Dakota State University, in more ways than one.

The civil engineering student from Harrisburg has had several opportunities to show that spirit during her time at State. Her highlights sound like the university’s event calendar: competing in the concrete canoe event; traveling abroad to Indonesia; serving as president of Alpha Omega Epsilon; being the treasurer and vice president in the American Society of Civil Engineers; completing an internship with POET; participating in Little International; singing in several choir performances and being an Admissions Ambassador for students looking to attend SDSU.

Renes said her time as an Admissions Ambassador was some of the most fulfilling work.

“So many people have a love for SDSU … I’ve loved sharing that pride with future students,” she said.

“I was standing onstage, taking it all in,” Renes said.

Assistant Director of Admissions Ryan Vande Kieft saw Renes and said she looked comfortable at the podium. He nominated Renes to be a student speaker at her own commencement.

“I always wanted to be a student speaker, but he put that confidence in me,” Renes said.

Now, she’s trading speaking in front of thousands at Frost Arena, for a recorded speech on the small screen, as graduates watch from the comfort of their own homes.

Renes has similar plans for her graduation day—with a twist. She is having close family members attending her backyard event—while practicing social distancing—and she plans to walk in full regalia when her name is called during the 10 a.m. virtual commencement ceremony. She will be the first student to deliver a commencement speech for a virtual SDSU ceremony.

“The viewers will be so much more in tune with what people are saying,” Renes said. “I feel a responsibility with making people feel OK with what has happened [with the pandemic].”

She hopes graduates will be more open and receptive to her speech because they all are in the same place.

“I am going to miss the people; that was the hardest thing about moving [classes] online. I wanted these last few weeks to say goodbye,” Renes said.

Her speech is about embracing the memories and the SDSU family. Long after the pandemic passes, Renes will do just that.

She was among the first to attend a football game and Jacks Bash in the Dana J. Dykhouse Stadium. She showed a dairy heifer in Little International, knowing nothing about cows ... and placed. She sang in countless Yuletide concerts (her mother’s favorite), with her final one, singing alongside her brother, who is now a member of SDSU choirs. She met her husband, Logan, for the first time at Hobo Day, not knowing three short years later they would be married.

Those are just a few memories in the mental scrapbook labeled as “My Time at SDSU” Renes will hold onto forever.