Began with the idea of decorating the lobby of newly rebuilt Harding Hall, the artwork of Molly Wicks is a reflection of South Dakota’s economy.

The four-layer artwork by Wicks is part of a university policy that requires certain projects to have an art installation, in its goal to promote public art. Designer architects from JLG architects, Public Art Commission, and others from the university saw potential in Wicks’ previous artwork which would best represent Harding Hall.

Agriculture being the backbone of the South Dakota economy, she was interested in how agricultural production moves around the state. The finalized artwork incorporates GIS mapping of South Dakota roadways, waterways, railways, and flight pattern spotting major airports in the state.

The layers, made out of PVC (polyvinyl chloride), approximately 9 feet long, 15 feet wide, and 4 feet deep, weigh around 200 pounds and hang from the ceiling of Harding Hall lobby.

Each layer of the four maps, with a total of eight different sides, is colored differently. A theme of SDSU blue and gold runs throughout the artwork. Wicks uses colors taking inspiration from natural resources such as earth, water, and sunlight. Other colors are reminiscent of South Dakota Board of Regents. While some layers are painted with colors, others are coated with chem metal.

“I also looked into Mr. Harding himself. He was an economist and a political scientist, he was very involved in the community, just like so many of our brilliant faculty members here at State,” said Wicks.  “And so I used his interest in the community and making something bigger.”

Gleaming through the window walls of Harding Hall lobby, the artwork is not only a fusion of South Dakota economy, but it also portrays a new chapter for the Department of Economics at SDSU. 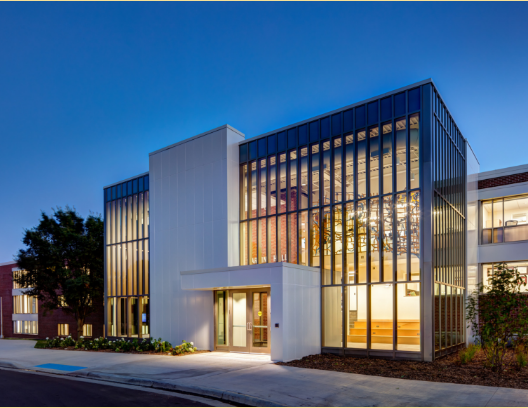