Human health and well-being are dependent on having clean air, clean water, native pollinators, food production and wildlife (just to name a few essential ecosystem services) and all these ecosystem services are produced by healthy ecosystems. The foundation for healthy ecosystems is healthy soil and native plants. Anthropogenic land-use, species invasion and fragmentation all have potential to degrade ecosystems to the point that essential ecosystem services are lost. The aims of our lab are to investigate how anthropogenic land-use, species invasion and fragmentation impact ecosystem function and how management and restoration can maintain or regain native plant communities and their ecosystem function. 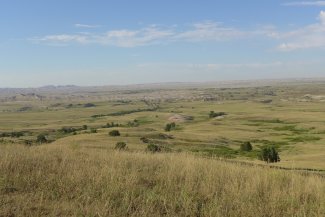 Native prairies are rich and diversity containing many different native plant species. Native prairies provide abundant ecosystem services including water regulation, wildlife and native pollinator habitat and soil conservation. Restoration of native plant communities, and the ecosystem services that they provide, is an emphasis in the Perkins Lab. 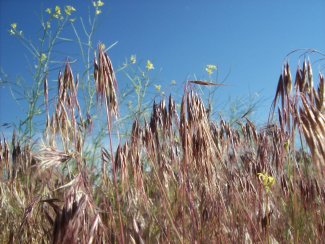 Within 24 hours, you can travel from the geographic center of North America to the geographic center of Asia illustrating the possibility for any species to be introduced into a new range at any time.  Invasive species can change almost every aspect of ecosystem function (native plant communities, primary production, nutrient cycling, water balance, disturbance regimes and habitat quality). 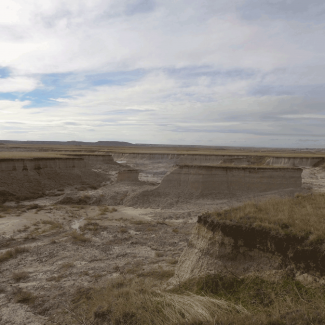 South Dakota contains an idea natural model system to investigate fragmentation- the South Dakota Badlands. Fragmentation in Badlands is an ongoing process that began over a thousand years ago resulting in thousands of fragments of a wide range of sizes and ages.