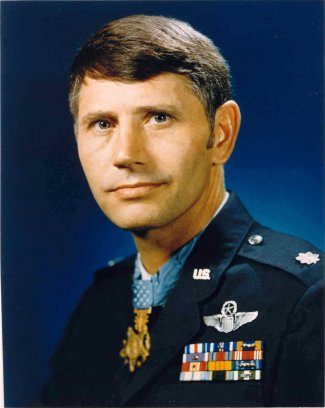 COL (Ret.) Leo K. Thorsness was born in Walnut Grove, Minnesota, on February 14, 1932. He and Gaylee Anderson met in the freshman registration line at South Dakota State College in 1950, married in 1953 and have one daughter, Dawn. Leo has a Master's Degree in Systems Management from the University of Southern California. In January 1951, Leo enlisted in the USAF; graduated from 54-G Aviation Cadets; served as SAC pilot, then TAC fighter pilot flying F-84's, F-100's and F-105's, accumulating about 5,000 hours of flying time. COL Thorsness was on a surface-to-air missile suppression mission over North Vietnam. COL Thorsness and his wingman attacked and silenced a surface-to-air missile site with ground-to-air missiles and then destroyed a second surface-to-air missile site with bombs. In the attack on the second missile site, COL Thorsness' wingman was shot down by intensive anti-aircraft fire and the 2 crewmembers abandoned their aircraft. COL Thorsness circled the descending parachutes to keep the crewmembers in sight and relay their position to the Search and Rescue Center. During this maneuver, a MIG-17 was sighted in the area. COL Thorsness immediately initiated an attack and destroyed the MIG. Because his aircraft was low on fuel, he was forced to depart the area in search of a tanker. Upon being advised that 2 helicopters were orbiting over the downed crew's position and that there were hostile MIGs in the area posing a serious threat to the helicopters, COL Thorsness, despite his low fuel condition, decided to return alone through a hostile environment of surface-to-air missile and anti-aircraft defenses to the downed crew's position. As he approached the area, he spotted 4 MIG-17 aircraft and immediately initiated an attack on the MIGs, damaging 1 and driving the others away from the rescue scene. When it became apparent that an aircraft in the area was critically low on fuel and the crew would have to abandon the aircraft unless they could reach a tanker, COL Thorsness, although critically short on fuel himself, helped to avert further possible loss of life and a friendly aircraft by recovering at a forward operating base, thus allowing the aircraft in emergency fuel condition to refuel safely. COL Thorsness' extraordinary heroism, self-sacrifice and personal bravery involving conspicuous risk of life were in the highest traditions of the military service, and have reflected great credit upon himself and the U.S. Air Force. Colonel Thorsness flew 19 1/2 Wild Weasel missions over North Vietnam in the 357th TFS, was shot down in April 1967, became a POW in North Vietnam and was released in 1973. After his service in the Armed Forces, Leo Thorsness worked at Litton Corporate Headquarters in Beverly Hills for six years, and in 1986, he and Gaylee moved to Seattle, Washington, where he served as a Washington State Senator from 1988 to 1992. In 1993, Leo and Gaylee built a waterfront home in Indianola, Washington, where they retired and were involved in aquaculture. In 1998, Leo and Gaylee moved to Alexandria, Virginia, and recently began building a home in Saddlebrooke, Arizona. Gaylee, for the third time, confirms this their "last house."