Army ROTC at SDSU has a rich tradition that dates back to the days when this university was first established. 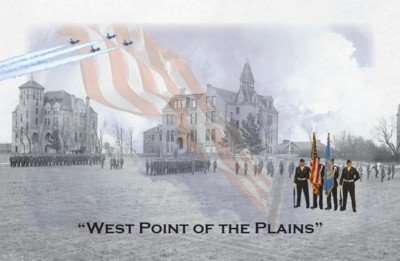 Military instruction was part of this school's program from the very beginning in 1884.

Graduates of SDSU and the Army ROTC program have gone on to distinguish themselves as officers in the Active Army, Army National Guard and U.S. Army Reserve. South Dakota State University was also the first University to commission a female into the United States Army Officer Corp.

General Omar Bradley was a former Professor of Military Science here at SDSU. Although he is more well known as being the commander of the largest field force in military history during World War II and the first ever Chairman of the Joint Chiefs of Staff, it was he who dubbed SDSU Army ROTC "The West Point of the Plains." This title is still used frequently and proudly by all of its members past and present.

General DePuy was an officer of the highest ideals. His courage, sound judgment and leadership produced military achievements of great value to his country. General DePuy's military career spanned 36 years and three wars. With his passing, the nation lost a faithful, valiant servant and the United States Army a great commander. The SDSU military hall is named after General DePuy taking on the name DePuy Military Hall.