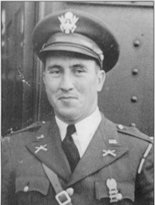 Willibald (Bill) C. Bianchi was born on March 12, 1915, in New Ulm, Minnesota. He grew up on a 72-acre poultry farm and assisted with farm chores. Responsibility was given to Bill early in life. While he was a sophomore at New Ulm High School, his father died and Bill had to take over the burden of farm work. At age twenty-one, Bill Bianchi enrolled at SDSU where majored in animal science and was active as an Army ROTC cadet and as a Jackrabbit football player. Upon graduation, Bianchi was commissioned as a second lieutenant in the United States Army. He requested foreign service in order to see action at the earliest possible date.

In 1941, Bill's first task was to convert Philippine natives into trained soldiers. Bianchi distinguished himself by transforming these natives into fearless jungle fighters. The Congressional Medal of Honor was awarded to Bianchi after the famous Toul pocket on West Bataan on February 3, 1942. Bianchi volunteered to lead part of a rifle platoon that was ordered to wipe out two strong enemy machine gun nests. He was wounded early in the action when two bullets passed through his left hand. He didn't stop for first aid, but discarded his rifle and began firing a pistol. He located a machine gun nest and silenced it with grenades. After being wounded a second time by two machine gun bullets through the chest, Bianchi climbed to the top of an American tank, manned its anti-aircraft gun and fired into the strongly-held enemy position until he was knocked off the tank by a grenade blast. Bianchi's actions succeeded in weakening the Japanese position so that it was later captured by infantrymen with minimal effort. Bianchi was captured with the main forces in the fall of Bataan on April 9, 1942.

He was imprisoned with other troops for 24 hours without food or water, then started the infamous 65-mile death march from Mariveles to San Fernando. Despite hunger, thirst and heat, Bianchi was up and down the line helping men, spurring them on and sharing their burdens. Bianchi was moved to several camps, each with conditions worse than the one before. There were no medical supplies, clean clothes or sanitary facilities and little food. Prisoners slept on mud-floored huts, soaked by rain. Bianchi's reputation as a caregiver continued as he did what he could do to aid his fellow men who, like himself, were suffering from the effects of the starvation diet, work and dreadful living conditions. Bianchi bartered with his captors and managed to obtain food from their mess halls and made numerous personal contacts to land aid for hundreds of prisoners. One of Bill's most difficult assignments was to provide the rather short rations that were issued by the captors honestly. All too often, those put in charge of food distribution used their position to better the lot of themselves and their friends at the expense of the overall group.

This human weakness showed itself in all ranks and in people from all walks of life. It took a man of great character and determination, such as Bianchi, to first see that all men received a fair share. On October 16, 1944, Bianchi was transferred to Bilibid prison in Luzon, where conditions were even worse than at O'Donnell and Cabuanatuan. He left Bilibid on December 12, 1944, aboard the Japanese ship Orokyo Maru, where he again provided assistance to his buddies. A few days later he was transferred to an unmarked prison ship. The morning of January 9, 1945, an American plane, unaware the target was filled with American prisoners of war, dropped a 1,000-pound bomb into the hold of the anchored ship. Bianchi was killed instantly. He was 29. Carrie Bianchi (Bianchi's Mother) wrote that, "As a mother, I am proud to be able to give to this generation and to our beloved America the most precious gift that life makes possible, my only son."