The ROTC program is designed to train students of any major to be a leader in the military. The military option is diverse. Graduates of ROTC can go into many military specialties, there is the option of active duty versus reserve duty and the geographic areas of assignment are numerous. South Dakota State University graduates from this past year included helicopter pilots, engineers, nurses, tank commanders, signal officers, artillerymen and quartermasters. The majority go on active duty with some opting into the reserves. Past graduates have moved on to many stateside locations as well as Europe and Asia. 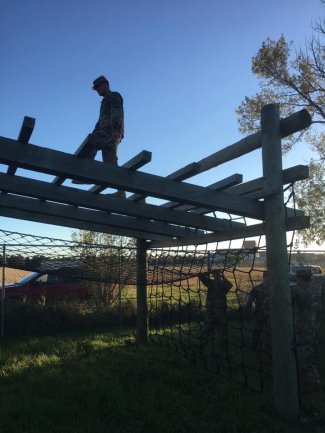 Additionally, the leadership training associated with ROTC and the military is valued greatly by United States industry as well as for government service. Industry "headhunters" look for military officers who have 4 to 8 years of active duty service. Industry knows that the responsibility given to officers greatly exceeds that given to their civilian counterparts. Military service is almost a prerequisite for government civil service jobs and service as an officer is best.

Finally it goes without saying that the skills of leadership learned in ROTC and in the Army enable students to become leaders in their field of study or in their career, as well as in their community and service organizations. You will have what it takes to balance working with both civilians and enlisted personnel, instilling confidence as an Officer, a leader, a trainer and a mentor.

Army ROTC prepares college students to succeed in any competitive environment. The leadership training and experiences that students have in Army ROTC will provide them with a foundation to become commissioned Army Officers upon graduation.

Upon completion of the Army ROTC program, graduates will be commissioned as Second Lieutenants in the U.S. Army and will embark on specialized training in their first Army branch.

Upon completion of Officer branch training and a first assignment, Army Officers may pursue additional specialized training and postgraduate education opportunities. They will be assigned to advanced leadership positions and to staff positions in upper management. Also, they may develop doctrine, teach military tactics or serve as advisers.

Medical Service Corps Officers are essential in treating and helping the overall health of Soldiers and their families. They are also responsible for much of the medical research that takes place in the Army. From medical fields such as optometry and podiatry to laboratory sciences to behavioral sciences, the Army Medical Service Corps includes many areas of specialty.

Armor Officers are responsible for tank and cavalry/forward reconnaissance operations on the battlefield. The role of an Armor Officer is to be a leader in operations specific to the Armor Branch and to lead others in many areas of combat operations.

An Officer within the Aviation Branch is first an expert aviator, but is also responsible for the coordination of Aviation operations from maintenance to control tower operations to tactical field missions. From providing quick-strike and long-range target engagement during combat operations to hauling troops and supplies, Army helicopter units play a critical role in getting the job done in many situations.

An Officer in the Army Corps of Engineers is responsible for providing support in a full spectrum of engineering duties. Engineer Officers help the Army and the Nation in building structures, developing civil works programs, working with natural resources as well as providing combat support on the battlefield.

An Infantry Officer is responsible for leading and controlling the Infantry and combined armed forces during land combat. They are also involved in coordinating employment of Infantry Soldiers at all levels of command, from platoon to battalion and higher, in U.S. and multi-national operations. Officers are leaders and being a leader in the Army requires certain qualities such as self-discipline, initiative, confidence and intelligence.

The Chemical, Biological, Radiological and Nuclear (CBRN) Officer advises the commander on issues regarding nuclear, biological and radiological warfare, defense and homeland protection. Chemical Officers also employ Chemical units in combat support with chemical, smoke and flame weapons, technology and management. Officers are leaders, and being a leader in the Army requires certain qualities such as self-discipline, initiative, confidence and intelligence.

Military Intelligence (MI) Officers are always out front, providing essential intelligence and in many cases saving Soldiers who are fighting on the front lines. MI Officers assess risks associated with friendly and enemy courses of action and act to counter or neutralize identified intelligence threats. The MI Officer also uses intelligence systems and data to reduce uncertainty of enemy, terrain and weather conditions for a commander.

Military Police Officers are utilized in direct combat and during peacetime to lead other Military Police Soldiers while they serve five main functions:

A Signal Corps Officer must be an expert in planning, installing, integrating, operating and maintaining the Army's voice, data and information systems, services and resources. Signal Officers must be highly intelligent, forward-thinking and have a complete knowledge of communications and data management technologies.

Finance Officers direct and coordinate finance and accounting functions and serves as the advisor to the Commander on all financial matters and matters pertaining to Finance Corps person­nel and units. They also establish, control and audit all finance and accounting systems. Finance Officers also prepare and distribute reports and financial statements to provide the commander and staff with adequate information for management, status of funds and budget purposes.

Quartermaster Officers are responsible for making sure equipment, materials and systems are available and functioning for missions. More specifically, the Quartermaster Officer provides supply support for Soldiers and units in field services, aerial delivery and material and distribution management. Officers are leaders, and being a leader in the Army requires certain qualities such as self-discipline, initiative, confidence and intelligence.

An Adjutant General Officer is responsible for helping Soldiers with the tasks that affect their overall welfare and well being, while assisting commanders by keeping Soldiers combat-ready. In many cases, the duties of an Adjutant General Officer are very similar to the function of a high-level human resources executive in the civilian world. Officers are leaders, and being a leader in the Army requires certain qualities such as self-discipline, initiative, confidence and intelligence.

Ordnance Officers are responsible for ensuring that weapons systems, vehicles and equipment are ready and available - and in perfect working order - at all times. Thus, Ordnance Officers and the Soldiers they lead are a critical component in the Army's success. Ordnance Officers also oversee the developing, testing, fielding, handling, storage and disposal of ammunitions.