From a Single Seed

A century ago as today, the world relied on South Dakota and the northern Great Plains to grow the best quality wheat. A single disease, black stem rust, was carried by the winds and threatened wheat crops from Mexico to the Canadian prairies. Stem rust infestations caused lost farm income, declined rural communities, and hunger. As a student at South Dakota State in 1916, Edgar McFadden envisioned and accomplished the first major breakthrough in conferring genetic resistance to stem rust. From a single seed, his work is still making a critical difference today, feeding billions of people.

Edgar S. McFadden (1891 – 1956) was a remarkable scientist who made breakthroughs in wheat genetics in South Dakota and in Texas. McFadden (widely known as “Mac”) was born and raised on a homestead in Day County, South Dakota. Stem rust was the most threatening disease of wheat and caused as much as 70% crop loss. 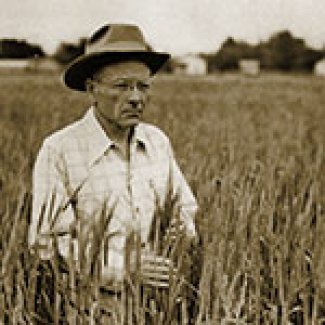 By 1913 he was conducting an aggressive breeding program in wheat, oats, corn and barley and by the age of 34, he accomplished what became the centerpiece of his career. From a single seed he developed a spring wheat variety that was immune to stem rust. Aptly, he named it ‘Hope’. Hope wheat was the first successful mating between common wheat and an ancestral wheat species, an accomplishment that most scientists of the time believed was impossible. This accomplishment set the stage for greater wheat production during World War II, the recovery years afterward, and the Green Revolution. After graduating in 1918 from South Dakota State with a B.S. degree in Agriculture, McFadden began a career with the USDA Bureau of Plant Industry and later became an enabling colleague with Norman Borlaug during the Rockefeller Foundation wheat improvement program in Mexico from 1944 to 1955.

In order to recognize the important contribution of Edgar McFadden and to continue his legacy, South Dakota State University has established the Edgar S. McFadden Endowment for Wheat Improvement to continue research on new varieties and other technologies that serve wheat producers.

1946 - Farm Journal: The Man Who Gave Us Bread: The Story of a Miracle- Hope Wheat, by J.D. Ratcliff

1948 - Fellow of the American Society of Agronomy

1949 - USDA Distinguished Service Medal: “For the betterment of rural life via his Hope wheat variety”

1950 - Progressive Farmer; Man of the Year in Service to Southern Agriculture

1951 - Fellow of the American Association for the Advancement of Science