This section details current physical conditions of the campus, most notably the uses of facilities and academic space, the need to provide connectivity within campus through green spaces, and how realigning campus parking in a safe and pedestrian-friendly manner will serve as a catalyst for implementation of several components of the plan. The section also details the current supply and demand for campus parking and how the university is meeting the needs of students, faculty, staff and daily visitors.

Today's campus reflects a century of activity, growth, changing needs and time-period development philosophies. There is now a commitment to establishing a more pedestrian-friendly campus. In order to bring this vision to life, improvements will be identified and made to campus vehicular circulation, parking and pedestrian-corridors.
Enrollment growth has prompted new construction and major renovations to support teaching, research and student housing. On average, enrollment has increased 3.7 percent annually for the 10 years ending with fall 2011 and is expected to level-off going forward. Residence halls in fall 2011 were operating at full capacity. The opening of Jackrabbit Grove in fall 2013 will achieve supply-demand equilibrium for students required to live on campus, primarily in the southeast neighborhood.
The general-use classrooms are scheduled, on average, for 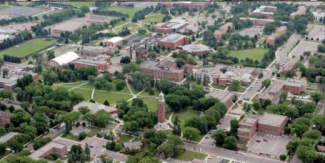 more than 27 hours of instruction during daytime hours Mondays through Fridays. Since 2007, 430,000 square feet of instructional, support, and student services space has been constructed. Several major renovations have modernized existing spaces, as well.
Despite the additional square footage the university continues to operate with space restrictions. Areas previously designated as "temporary swing space" to facilitate campus reorganizations and remodeling projects are being used in a more permanent fashion, such as the relocation of faculty offices to West Hall. The Department of Health and Nutritional Sciences has been moved to the Intramural Building, previously used as swing space.
Similarly, suitable research space is at a premium with the growth of Ph.D. programs and grant-funded research projects. Overall research expenditures grew 121 percent from Fiscal Year 2007 through Fiscal Year 2011. A 2011 study classified 72 percent of research space as "marginal" or "inadequate."
Enrollment headcount at South Dakota State University increased on an average of 3.7 percent for the decade between 2000 and 2010. In the fall of 2013, a total of 11,754 students are forecasted to attend the Brookings campus.
As the university meets its enrollment growth needs and continues its commitment to providing the best-in-class teaching, learning and research facilities, the goal is to meet this demand within the campus core. By reducing parking and roads from the campus core, land is made available for building development that allows the existing functional districts to add more square footage while enhancing open space.
The in-fill approach implements the guiding principles of the 2025 Facility Master Plan and creates a pedestrian-friendly environment on campus. Figure 2.4 illustrates existing campus land uses.

Since 2005 several major construction projects have been completed and have modified the campus fabric.
These projects include: 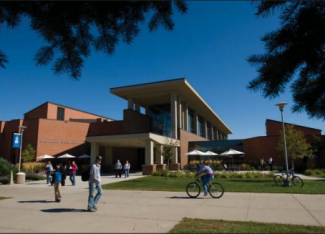 The following are future improvements: