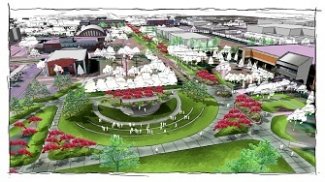 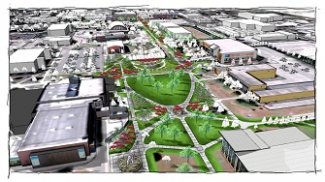 Campus greens are among the most recognizable and memorable campus spaces. They provide settings for classes, special events, recreation and contemplation. Campus greens and open space should reinforce the high-quality values and vision of the university. Characteristics of these spaces should include:

The Jackrabbit Green Development Plan, a concept plan, serves as a guide for the creation of a strong east-to-west pedestrian corridor along the north end of campus. The concept plan for the Jackrabbit Green establishes a pedestrian corridor highlighted by gathering nodes, campus art, landscape and wayfinding signage. The plan consists of a series of open spaces connected by sidewalks within the core of campus. The existing north/south corridors connecting to the Jackrabbit Green will be enhanced, extending improvements to the historic College Green and other prominent open spaces throughout campus.

The Jackrabbit Green Development Plan also looks at opportunities to develop a memorable outdoor space in the areas among the University Student Union, Briggs Library and Miller Wellness Center. The plan incorporates a stage and amphitheater into this space, activating an area of campus that has become a center for student activity. The completion of the Jackrabbit Green will result in a contiguous unified corridor spanning a significant portion of the university campus.

The construction of the Medary Avenue pedestrian entrance began in fall 2011. This feature includes a campus monument, seatwalls and elevated ornamental plant beds. This entry is a key component for establishing the architectural language for the entire Jackrabbit Green corridor, including building materials, site details and landscape treatments.

The section of the corridor extending from the Medary Avenue entry to Briggs Library likely will occur as part of building projects associated with the Sexauer Field site. Construction of the amphitheater and the major improvements planned for the green between the University Student Union and Ag Engineering will require a major investment by the university, likely to be implemented as a stand-alone project as funding becomes available.

As the campus fabric is redefined, it is recommended that the university consider options to re-engage the College Green. The development of pedestrian corridors should include strong connections to the College Green. The repurposing of buildings or additions of new buildings near the green should be studied as ways to attract a portion of the student population back to the College Green. Removing the street and parking from the west side of the Morrill Hall will create the opportunity to develop that space into a major north-south campus pedestrian corridor.

Changes to the College Green should be done with great respect for the history of the space, with the goal of re-engaging the student population and reinforcing the significance of the College Green.