The E.A. Martin Program supports nutritional research involving a wide variety of disciplines. Active research projects provide SDSU faculty and students the opportunity to expand their knowledge base and participate in research. The South Dakota Rural Bone Health Study is one of the largest research studies conducted within the Ethel Austin Martin Program. Other current and past projects are highlighted here, followed by a list of previous projects.

The EAM Program has a mobile research unit that moves the laboratory to the field. On board this unit is state-of-the-art imaging equipment that can be used for bone measurements and body composition analyses. This equipment includes a dual energy x-ray absorptiometer (DXA, Hologic 4500A Discovery), two peripheral quantitative computed tomography (pQCT XCT 2000 & XCT 3000, Norland/Stratec) and a Biodex. The unit provides an important resource for SDSU investigators.

The South Dakota Rural Bone Health Study was started in 2001 and is following almost 2,000 individuals who reside in eastern South Dakota for at least 7.5 years.

Additional details regarding the SDRBH Study

The EAM Program partnered with the Sanford Profile Program to conduct the SDSU Exercise Study. The purpose of the study was to understand the effects that different types of exercise have on maintenance of long-term weight loss in participants enrolled in the Sanford Profile diet program. Participants from different Sanford Profile locations enrolled for six months. For the first three months, they completed an assigned exercise DVD in their home and then continued to be monitored for the following three months. Analysis of data collected in this study is ongoing.

The purpose and approach to these surveys was similar to that of the 2014 SD PRAMS-like survey. Results were analyzed and shared with individual Tribes.

The purpose of the study Vitamin D Fortified Cheese and Vitamin D Status in the Elderly was to determine the effect of vitamin D-fortified cheese on bone health in an older population. Due to a steadily declining rate of milk consumption among all age groups, cheese has been chosen as an additional food source to deliver supplemental vitamin D. Participants in this two-month study were randomly placed into one of three groups. One group received vitamin D-fortified cheese, one group received cheese with no added vitamin D and one group received no cheese. Indicators of bone health and muscle strength were obtained at the beginning and end of the study. Investigators are from the Dairy Science Dept, the E.A. Martin Program, and the Applied Physiology Laboratory.

The Bone Mass Inheritance Study in collaboration with Creighton University Osteoporosis Research Center: The purpose of this study was to identify adults with a bone mineral density (BMD) that is either significantly higher or lower than those compared to the normal population. It was hypothesized that high or low BMD is predetermined by genetic factors.

The Collection of Pediatric Reference Database for Bone Ultrasound-North America in collaboration with Sunlight Medical Ltd.: The purpose of the study is to establish reference values using quantitative ultrasound for bone measurements (speed of sound) by age in North American pediatric population for the Sunlight Omnisense" 7000P for two skeletal sites; i.e. 1/3 distal radius and mid-shaft tibia. The EA Martin Program also has been instrumental in establishing pediatric reference data for the Hologic DXA pediatric software.

The purpose of the South Dakota Children's Health Study was to determine in a randomized controlled study whether calcium intake modifies the bone response to physical activity in preschool children. Over 200 young children were recruited from participating child care centers in eastern South Dakota. Calcium and activity interventions were done daily in the centers and changes in bone mass accretion over a 1-year intervention period were determined. Our findings indicated that the beneficial effect of calcium was only observed in children assigned to a gross motor activity program and not those assigned to a fine motor program.  The study was funded by the National Institutes of Health (NIH/NIAMS).

The purpose of the National Children's Study (NCS) was to examine the effects of environmental influences on the health and development of more than 100,000 children across the United States, following them from before birth until age 21. The original goal of the NCS was to identify environmental factors that were important in the growth and development of children and long-term health outcomes. Brookings County, South Dakota and Yellow Medicine, Pipestone and Lincoln (BYPL) counties in Minnesota was one of the locations randomly chosen from all counties across the US to serve as one of the pilot, or Vanguard, sites for the study. SDSU was the Study Center for this location until July 2012 when the federal government determined to end the NCS and closed all study centers.

The Stress Reaction/Stress Fracture Study assessed multiple factors relating to stress fracture risk. There are many potential risk factors for a stress reaction or stress fracture including factors that are both intrinsic (factors that influence bone strength) and extrinsic (factors that influence mechanical loading). Intrinsic factors include sex, genetics, estrogen status, lifestyle, nutritional status, bone mineral density and bone geometry. Extrinsic factors include training environment and equipment, physical training intensity and frequency, biomechanics and type of sport. The specific aims of the study were to: 1.) Identify sport- and sex-related differences in incidence and location of stress reaction/fracture; 2.) Identify risk factors associated with stress factor cases vs. controls; 3.) Identify differences in the bone geometry of the tibia at the specific site of diagnosed tibial stress reaction or fracture compared with the same site on the contralateral limb.

The E.A. Martin Program worked collaboratively with the Health and Nutritional Sciences Department on the Football Study, which looked at changes in body composition over a season in collegiate football players. The investigators hoped to determine what body composition changes are taking place during the season and what other factors are related to these changes. By determining the body composition factors related to these changes, they hope to develop intervention programs to attenuate any negative changes and improve performance and injury prevention measures throughout the season. 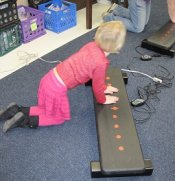 The Vibration Study evaluated the effect of exercise using vibration on the bone and muscle development in the forearm of healthy children. The forearm is the most common site of fracture in children. Low bone density and smaller bone size are associated with increased fracture risk in this population. We enrolled children 6-10 years of age from an after school program and compared 2 different exercise groups to a control group who did not exercise. The exercises targeted the forearm and were done on yoga mats on the floor or on a vibration platform (see picture above). We found that the exercises increased the bone density of the radius, the larger forearm bone, in both of the exercise groups. However, after 4 months, the changes seen in the floor group persisted while the changes seen in the vibration group dissipated. The research is published in the Journal of Musculoskeletal and Neuronal Interactions.

In the Muscle-Bone Study, we recruited healthy participants (aged 6 years and older) from eastern South Dakota to study muscle-bone relationships in the arm and leg. Muscle contractions place forces on tendons, which in turn cause forces to pull on bones. Bones must adapt to the forces that are supplied by the muscles by changes in shape, structure and material properties. We expect that 1.) muscle-bone relationships will exist in both genders at all ages; 2.) gender differences in muscle-bone relationships will not exist until after puberty at which time females will have greater bone per muscle mass than males; 3.) physically active participants will have a greater muscle area at all ages, but older individuals will have lower peak muscle force per muscle area compared with younger individuals; and, 4.) bone density and size will be more strongly associated with muscle force than muscle area.

The purpose of the study on Determinants of Bone Health in Former Preterm Children was to determine whether there are differences in bone mass and size among infants born preterm, near-term or at term and to identify environmental factors associated with bone mass and size in children 3-8 years old. Our long-term goal is to optimize peak bone mass and minimize fracture risk in children who may be at increased risk for low bone density. Participants of the study were children who were born at Sioux Valley Hospital between January 1997 and January 2003. We expected preterm children to have smaller bone size and lower activity levels than term children. Study participants completed a one time visit that included a food frequency questionnaire, health history, activity questionnaire, parental anxiety and vulnerability questionnaires, diet analysis, health history, DXA and pQCT tests and forceplate measurements. Haifa Samra used these data for her PhD dissertation in Biological Sciences.

Factors Associated with Iron Status in a Hutterite Population

In a study of Factors Associated with Iron Status in a Hutterite Population, we recruited healthy Hutterite participants (aged 6 months and older) from 13 Hutterite colonies that participate in the Rural Bone Study. The purpose of this study was to determine whether reproductive history, gender, age, dietary iron intake, breast-feeding and weaning history or genetics influence iron status among a Hutterite population. We were particularly interested in infants and toddlers where iron deficiency is a particular concern because it can adversely affect child development and behavior. Around 4-6 months of age, infant iron stores begin to deplete, therefore complementary foods should be introduced to the infant to help supply key nutrients such as iron at this time. Other population groups of concern are adolescent females and women of childbearing age, especially those that are pregnant. For the study, participants completed a one time visit that included a health history questionnaire, hemoglobin testing and a food frequency questionnaire. Jane Osowski organized these visits and used the information collected towards a PhD in Biological Sciences.

The purpose of the Former Athlete Study was to investigate the effects of collegiate sport participation on bone health later in life. Many studies have reported that odd- and high-impact loading activities during adolescence are beneficial for bone mass accrual, areal bone mineral density, and bone size. However, there are inconsistent findings among studies investigating the benefits of early life physical activity on bone once  athlete completes their career or exercise reduces. Therefore, the study used both DXA and pQCT measures after varying years of retirement and within different sports (loading patterns) to determine the effects of retirement from a high level of sport competition on bone parameters and bone geometry. Maggie Minett used these data for her doctoral dissertation in Biological Sciences.

Neuromuscular Changes in Females Throughout the Menstrual Cycle

The purpose of the Longitudinal Soccer Study was to investigate possible changes in muscle strength, body composition, bone mineral density and bone geometry in division one female collegiate soccer players within a competitive season.

Student-athletes spend multiple hours per week meeting the physical demands of participating in collegiate athletics. This includes time spent strength training, practicing and competing in games throughout the in-season. During off-season, the student athletes continue to strength train and practice but not to the degree experienced during the in-season. It is possible that the intensity of the in-season environment may have a negative impact on the body as student-athletes have minimal time for rest and recovery Maggie Minett used these data for her doctoral dissertation in Biological Sciences.