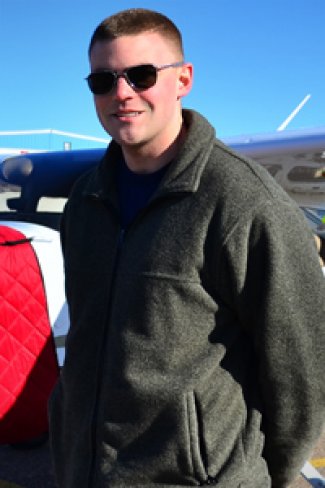 Why did you choose to attend SDSU?

I transferred to SDSU after one of my old flying buddies called me up and told me that we could get bachelor’s degrees in aviation. We had both done aerospace engineering at Iowa State University, but as pilots we were way more interested in flying planes than designing them. SDSU had everything I was looking for: an interesting major, low cost and an Air Force ROTC detachment where I would be able to continue officer training.

What has been your most interesting class, and what about it did you enjoy?

My favorite class has been AVIA 470, Flight Instructor Theory. The teacher, Warren Hovland, is a true jack of all trades with a passion for sharing knowledge. From the classroom to the cockpit he is always finding something new to share. Best day in that class was taking one of SDSU's planes up and doing spin training!

Who has inspired you the most at SDSU and in what way?

Two teachers stand head and shoulders above the rest. The first was Barb "Crazy K" Kleinjan. I had her for speech, and she made that class fun and constructive- and those of you who have taken that class understand that that is no small feat. She had a honest, vested interest in each of her students which was truly inspiring.

The second was John Taylor. Brilliant, passionate and intense, this professor's enthusiasm is contagious. He sets the bar high but empowers his students to reach a goal they can be proud of. He truly cares about the betterment his students both in and out of the classroom.

What is your favorite or most memorable SDSU experience?

The travel opportunities I have had through the SDSU Air Force ROTC (AFROTC) Detachment and the Aviation Program have both been fantastic. With AFROTC I have been to Seattle, St. Louis and NYC, as well as several military bases across the country. Probably the most fun trip I took was last May-June when I was invited down to Maxwell Air Force Base in Alabama to serve as a training assistant for the officer's version of basic training. It was a incredible experience to take a hands-on role in training up the future leaders of the Air Force.

On the aviation side, flying is always fun, but the best flying experience was when I was working on my Commercial Pilot's Certificate. A pilot buddy and I flew out of Brookings at about 4am heading for Valentine, NE. The sun started rising right about when we got over the sand dunes, and it was quite a sight to see unfold from six thousand feet. We had breakfast and then he picked up a car, so I flew back to SDSU in time for my 10:00 class. After class I jumped back in the airplane, flew down to Dubuque, IA and had a late lunch with some friends. After that I flew up to Prairie du Chien, WI and had dinner with the folks I took off into the sunset and flew back to Brookings under the stars.

Where do you see yourself in the future/10 years?

Well I have a pilot slot with the Air Force, so I will still be flying jets at that time!

What piece of advice would you give new students?

First, buy a day planner and use it. Second, if you have a goal, go for it. Don't let anyone tell you it can't be done or you aren't good enough. There is no barrier immune to hard work and perseverance- but the moment you give up, you're done. A good friend of mine used to say: "You'll miss 100% of the shots you don't take." If you don't put forth the effort, if you don't take the risk, you will not succeed.