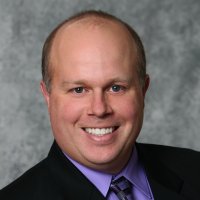 Mike Lockrem began his duties as Director of University Marketing and Communications at South Dakota State University in December 2009.

He has worked for more than 25 years as a communications and marketing specialist in higher education, with private and publicly-traded companies and nonprofit organizations. Prior to SDSU, Lockrem served as the corporate communications manager for VeraSun Energy, the world’s largest ethanol producer at the time.

He also worked as the director of athletic communications for the University of Minnesota and held the position of commissioner of the Northern Sun Intercollegiate Athletic Conference. Lockrem moved to South Dakota in 2006 where he began his corporate experience as the director of public relations for POET Companies in Sioux Falls.