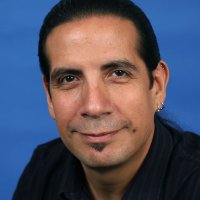 Frank Robertson joined the SDSU Department of Journalism and Mass Communication in the fall of 2017 as an instructor to teach Intro to Digital Media, Basic Photography, Photojournalism, Advanced Photography, and Advance Multiplatform Storytelling — a course he developed while earning his master’s from the department’s online Master of Mass Communication program the same year.

After receiving his B.A. here in 1995, he spent most of the past 22 years in the newspaper industry as a photojournalist and multimedia editor, working at the Aberdeen American News and Sioux Falls Argus Leader here in South Dakota before spending ten years in southern Ohio at the Chillicothe Gazette, first as a staff photojournalist then eight years as its multimedia editor.

Frank was recognized in 2014 as Distinguished Alumni by the department and has earned dozens of awards for his work throughout his career, earning eight in just his final year at the Gazette which included five 1st Place awards and Best Photographer (Ohio APME Newspaper Awards, Div. I).

While grateful for his awards, he feels many of them are incidental, not integral, to a career founded proudly and firmly in community journalism — a career that has allowed him to serve his communities as a photojournalist, editor, and instructor. It’s also a career that has afforded him the opportunity to work with, learn from and be inspired by the young journalists he’s instructed, mentored, and managed at newspapers and workshops.