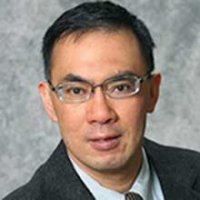 As professor in the Department of Civil and Environmental Engineering at South Dakota State University, I teach and conduct research in fluid mechanics and hydraulic engineering, supervise student research and capstone design projects, and participate in professional and outreach activities both inside and outside the university.

I pursue a focused and sustained research program in breaking waves, bridge hydraulics, and scour. In the first area, my primary effort has been to quantify the kinematics and dynamics of turbulent flows induced by breaking waves. My students and I have systematically measured and studied the breaking-wave-generated flow fields in solitary, regular and irregular waves using the laser Doppler anemometry (LDA) and particle image velocimetry (PIV) techniques. In a current research project funded by the National Science Foundation (NSF), we are employing a volumetric three-component velocimetry (V3V) system to conduct three-component, three-dimensional (3C3D) velocity measurements of sediment-laden flows under plunging waves to answer fundamental questions about sediment suspension and transport in the surf zone. Archived research data from completed studies (see Applications of Research) may be obtained through individual requests.

My research in bridge hydraulics and scour is focused on the hydraulics of bridge waterways with complex channel-floodplain morphology and bridge scour in cohesive soils. In 2010, I completed a research project to evaluate the Scour Rate in Cohesive Soils (SRICOS) method by comparing scour predictions with measured scour at three bridge sites in South Dakota. The SRICOS method produced scour estimates that are much closer to the measured scour than the traditional HEC-18 method, since it takes into account the slower rates of scour in cohesive soils. The study also identified several critical input parameters in the method. We recently completed a research study on compound channel flows in bridge waterways. We used the Surface Water Modeling (SMS) system to model two-dimensional (2D) flows around highway structures in different bridge settings (e.g., crossing at a sharp bend, severely contracted bridge opening) and compared the numerical results with field measurements. The objective of this research was to find a cost-effective way to calculate the flow parameters needed for scour prediction.