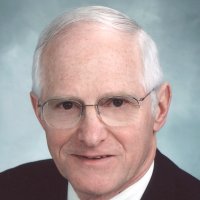 Dr. David J. Schingoethe served SDSU for over 42 years as a faculty member. He joined the Dairy Science Department in 1969 as Assistant Professor, was promoted to Associate Professor in 1973, received tenure in 1975, and was promoted to Professor in 1980. In 2003 he was named Distinguished Professor. Dr. Schingoethe has made major contributions to dairy education through teaching and mentoring of undergraduate and graduate students, and to dairy farmer groups. He taught two undergraduate courses and one graduate course in addition to Thesis and Special Problems but had lectured in practically every Dairy Production course in the department. Dr. Schingoethe had served as advisor to 10 to 30 undergraduate students every semester and had been the major advisor to 34 M.S. and 9 Ph.D. students. While he had not held a formal extension appointment his extension activities included over 160 publications specifically targeted for outreach purposes. He had also presented 58 papers at a wide range of regional, national, and international conferences in Canada, Germany, Belgium, Netherland, Mexico, Ukraine, and Russia.

Dr. Schingoethe was clearly recognized as the top dairy cattle nutrition researcher in the country. His grant activity, publication record, and graduate student mentorship were testimony to his highly productive research program. He has received numerous grants from a diverse range of funding sources, including the National Science Foundation, various industry organizations and commodity groups. His publications include over 153 peer reviewed papers in reputable journals, almost 228 abstracts of papers presented at scientific meetings, 11 chapters in books, and 2 patents. His research has covered the areas of dairy nutrition, enhancing the nutritional value of milk fat, optimization of forage use, and applications of byproducts in feeds. He was a leader in the application of cheese whey in dairy cattle feeding and in the use of agricultural by products such as distillers grains and sunflower products in dairy cattle diets. He has studied the impact of cattle feeding techniques on the nutritional and processing characteristics of milk and milk products. His work clearly had a very positive impact on dairy cattle nutrition, ration development and milk production.

While maintaining excellence in his faculty role, Dr. Schingoethe had served his profession in an exemplary manner. He has been a member of The American Dairy Science Association (ADSA) since 1964 and has attended every annual meeting since 1967. He served on at least 9 ADSA committees in leadership roles. He was a member of the editorial board of the Journal of Dairy Science from 1973-1978 and 1991-1996, and editor for the Nutrition, Feeding, and Calves Section from 1998-2000 and 2002-2011. He has served in virtually all leadership positions of the Midwest Branch of ADSA and the International ADSA for which he was president during 2000-2001. Similarly, between 2001 and 2004 he was a member of the Board of Directors and President of the Federation of Animal Science Societies (FASS). Few ADSA members nationwide have served the organization in such a broad manner.

Dr. Schingoethe’s excellence has been recognized through at least twelve university, national and international awards. Among these are the highest awards of his professional organizations; the Award of Honor of ADSA, Fellow of ADSA and Fellow of ASAS.